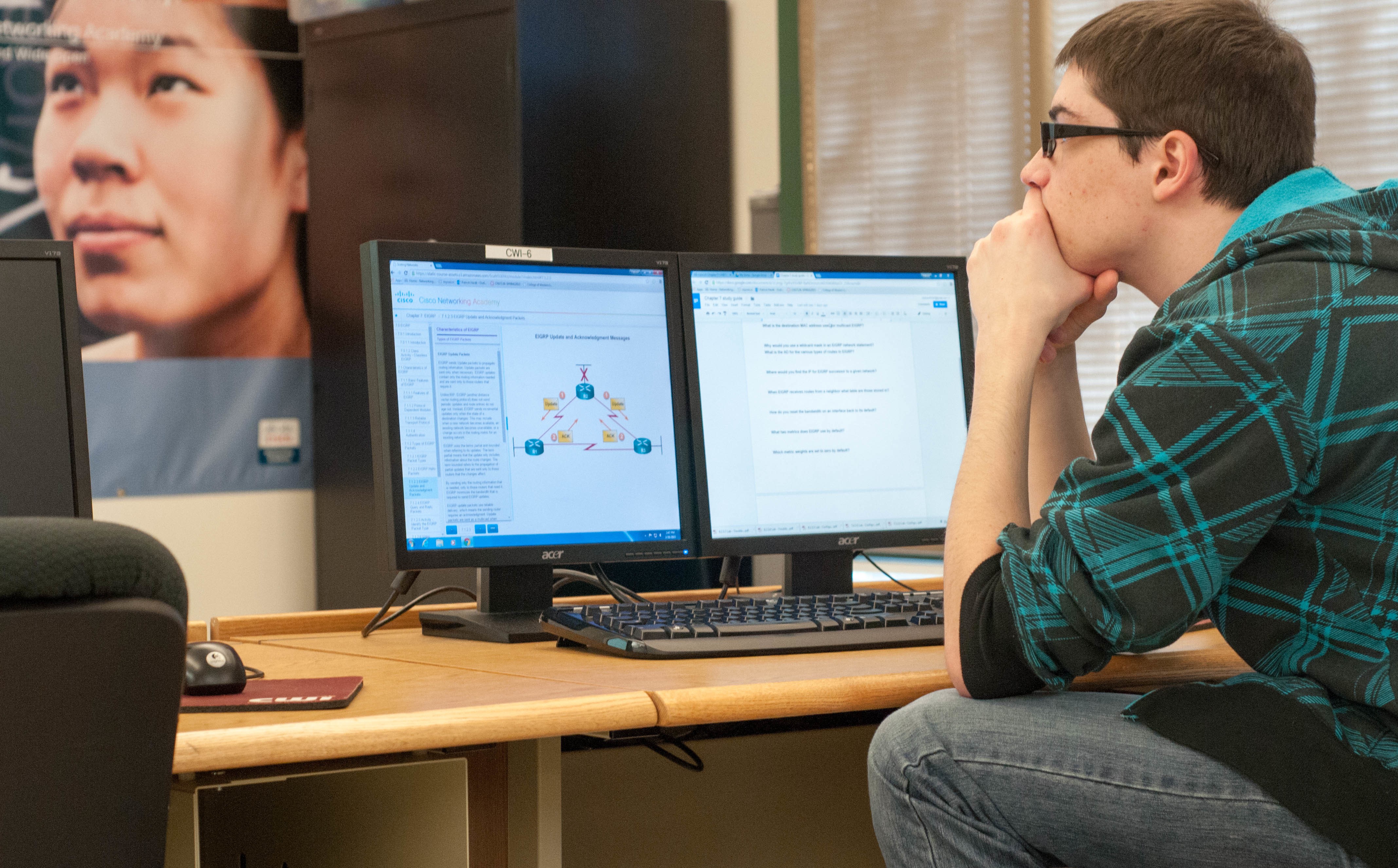 Understanding of computer technology, Internet navigation, email, Windows operating system features, and file management is essential for success in the Cisco Networking and Security program. If a student is concerned that their basic computer skills are not competent, it is highly recommended that they speak with the department chair prior to enrolling in program courses.

Note: Registrations for Cisco Networking and Security Technology courses are restricted to students within the major.

Refer to How to Read Course Descriptions for an explanation of elements found within the course descriptions below.

Introduces the fundamentals of computer and mobile device hardware and software, security, networking, and the responsibilities of an IT professional. Includes scripting basics, sharing resources in a networked environment, using remote access technologies, IoT device configuration and communication types, and best practices in documentation and change management. PREREQ: Cisco Networking and Security Technologies major and completion of Units 1-4 (or placement into Unit 5 or higher) of MATH 095. COREQ: CNST 127. (3 lecture hours, 6 lab hours, 6 credits)

This course is designed to permit the offering of special topics appropriate to a student's program. Regular or frequently recurring topics are not offered under this title. The course may be repeated as new topics are presented. (1 lecture hours, 0 lab hours, 1 credits)

Examination of the roles and responsibilities of members on an IT security team. Includes computer forensics, threat analysis, and incident response for network security administrators and engineers using Cisco equipment and devices. The curriculum in this course is aligned with, and emphasizes the attainment of, the Cisco certification exam 200-201 Understanding Cisco Cybersecurity Operations Fundamentals (CBROPS). Students are required to attain instructor verification of current Cisco CCNA certification prior to registration. PREREQ: CNST 129, CNST 135, and PERM/INST. COREQ: CNST 230 and CNST 240. (2 lecture hours, 4 lab hours, 4 credits)

Examination of basic networking applications and how to implement automation workflows across network, security, collaboration, and computing infrastructure. Includes use of Cisco and other application program interfaces (APIs), as well as modern development tools. This course meets the requirements for the Cisco Certified DevNet Associate certification. PREREQ: CNST 230, CNST 238, and CNST 240. COREQ: CNST 244 and CNST 248. (2 lecture hours, 4 lab hours, 4 credits)

Examines the basic elements of programming in Python, as well as general computer programming concepts and techniques. Students will become familiar with the object-oriented approach, coding tasks, and fundamental notions and techniques used in object-oriented programming in association with Cisco equipment and APIs. This course meets the requirements for the PCEP: Certified Entry-Level Python Programmer certification. PREREQ: CNST 230, CNST 238, and CNST 240. COREQ: CNST 242 and CNST 244. (2 lecture hours, 4 lab hours, 4 credits)

The PDF will include all information unique to this page.

The PDF will include all information from this edition of the catalog.